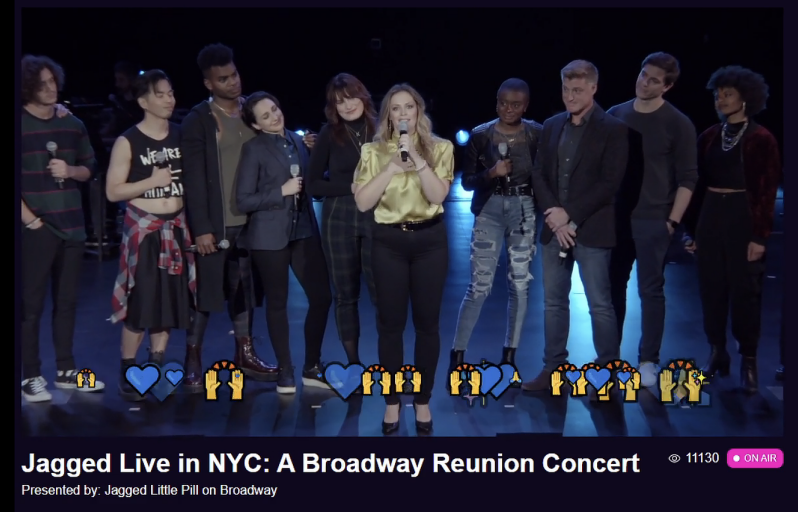 “Producing Jagged Live in NYC was a much-needed dose of collective joy during these dark times. We were thrilled to reconnect our company and our fans for this glorious celebration of story and music, and we are grateful for Stellar’s superb technology and quality in creating this live and unforgettable concert experience.”

About Jagged Live in NYC: A Broadway Reunion Concert

Jagged Little Pill is a rock musical inspired by the 1995 Alanis Morissette album of the same name. The show premiered at the American Repertory Theater (ART) in Cambridge, Massachusetts, on May 5, 2018 and officially opened on Broadway on December 5, 2019.

The reviews were incredible. The performances sold out. The show was primed to become the theatre event of the season. And then COVID-19 hit, bringing it all to a screeching halt.

Like so many did, the producers initially opted to organize several benefit performances on Zoom. Very quickly, they realized the platform was not suitable for performance and the video and audio were limited. They turned to Stellar, the only full-service livestream partner for professional live entertainment organizers, committed to delivering premium interactive online shows to paying audiences around the world. With a host of exceptional features that would give both the show and its audience an exceptional experience, the producers knew their reunion concert for Jagged Little Pill could be a creative and financial success.

And with that, the concept for Jagged Live in NYC was born — a live online concert incorporating music from the stage musical, a fan request portion of the show, and a VIP meet & greet.
‍

Along with finding a purpose-built streaming platform that would include the right video and audio quality to properly showcase the performance, the Jagged Live producers wanted to generate real revenue, keep the show top of mind, and engage current fans while also creating new ones.
‍

The producers chose Stellar as their online event platform due to Stellar’s robust feature set, opting for Stellar’s Professional package. With an online venue partnership in place, Jagged Live in NYC: A Broadway Reunion Concert was officially a go for mid-December 2020!

Stellar’s organizer support team collaborated with Jagged Live to get the event ticketing page up and running in two days, with a variety of offers and pricing tiers that included: a 7-day limited pre-sale price point, accessible with an offer code for theater affiliate partners; an early bird livestream-only price point, a regular price livestream-only price point; multiple merchandise and livestream price point bundles; and last but not least, a VIP Meet & Greet experience sponsored by American Express and only available to purchasers using an American Express credit card at checkout.

With the ticketing infrastructure in place, Stellar’s marketing consultants worked with the show’s marketing team on a multifaceted launch strategy. More than 40 affiliate theaters were recruited, onboarded, and provided custom tracking links to record all visits and sales conversions generated by their outreach. Additionally, an online advertising campaign on Facebook and Google and direct marketing to Jagged Little Pill’s existing following via social media and email promoted the limited pre-sale.

After the campaign launch, Stellar and the show continued to collaborate on all marketing channels up until the show date, capitalizing on two national TV appearances by Jagged’s cast and the announcement of the show’s 15 Tony Award nominations.

Stellar’s customer service team also provided direct technical support to any ticket buyers needing assistance during the entire run of sale while also providing full-service support the day and night of the show.

Jagged Live in NYC  was a creative and financial triumph. This one performance sold the equivalent of more than a two-week sold-out run in the musical’s Broadway home at the Broadhurst Theatre, ​​All American Express VIP Meet & Greet packages sold out, over $4,000 in donations were collected the night of the show for RAINN,  and very little merchandise inventory remained to be sold following the livestream.

Ticket buyers commented on live chat and social media about how great the show was and how they had “the best seats in the house.” Jagged Live in NYC offered a great ticketed-event experience in its own right, while also helping to promote the in-person Jagged Little Pill Broadway show. The concert was so successful that it was re-released for an encore performance.

The press was also unanimously positive. Jerry Portwood from Rolling Stone wrote, “[I]t was refreshing to re-join this passionate cast of theater professionals.”