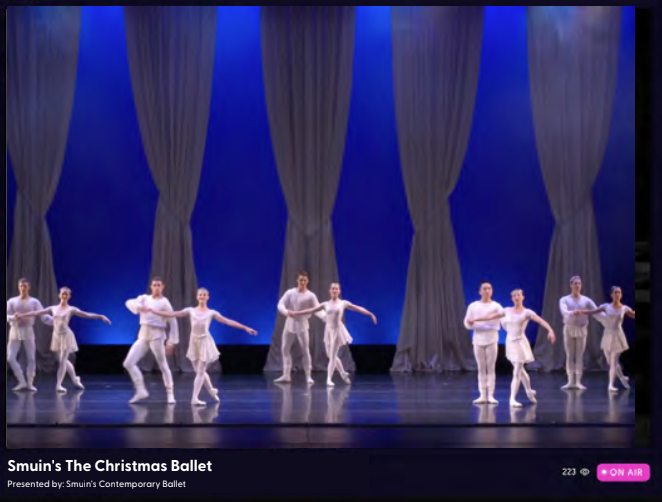 “Stellar came along at the perfect time for Smuin. Though we had no streaming experience, Stellar's easy-to-use platform and extensive technical support allowed us to feel confident that we could produce high-quality content for our fans. We look forward to seeing where our partnership with Stellar leads us.”

Smuin Contemporary Ballet is one of Northern California’s leading nonprofit dance companies. In a normal year, Smuin performs more than 60 shows per season in theaters throughout the greater Bay Area. Their team, led by artistic director Celia Fushille, has added more than 50 new works to the American dance repertoire, including many choreographed by the company’s namesake, Michael Smuin.
‍
When COVID-19 hit, Smuin had to quickly pivot. Their first steps included posting previously recorded dance performances to their website for their existing patrons, as well as staging a few socially-distanced outdoor performances. But as it became clear that their in-person events would be delayed well into 2021, the team began investigating options for ticketing livestreams of their hallmark, The Christmas Ballet.
‍

Having offered recorded performances on demand for free, Smuin needed to find a way to make their shows worthy of a paid ticket. After surveying other successful online events, the team realized that the very act of livestreaming their content would generate more demand.

In addition, Smuin needed to find a way to elevate the livestream experience. Their number one priority: find an online event platform with interactive tools. And, with a very short sales period leading up to the performances, they needed to be up and running – fast.
‍

For the Fall Dance Series, the first performance date featured an individual performance livestream ticket priced at $25, along with a four-show package priced at $75. Donation levels ranged from $25 to $5,000. After the Fall Dance Series concluded and The Christmas Ballet was set to go on sale, Smuin raised ticket prices based on the holiday show’s higher production value and to test the market. To further experiment, Smuin decreased the number of donation options in order to simplify the decision for the ticket buyer.

Stellar’s organizer support team provided Smuin’s box office team with extensive training on the Stellar platform as well as its credit card processing system, Stripe. Among other benefits, Stripe allows event organizers to be the merchant of record. This feature gave Smuin control of all refunds and the ability to receive all ticket payments directly, without needing to wait for Stellar to authorize payouts.

Stellar’s customer service team also provided direct technical support to any ticket buyers needing assistance during the entire run of the sale. Most importantly, Stellar’s team worked with Smuin to develop an “online event as a gift” concept. Stellar collaborated with Smuin to manually process gift requests for the Fall Dance Series, using key learnings to build gifting as a self-serve tool by the time of The Christmas Ballet.

Smuin’s Christmas Ballet proved to be a breakthrough for livestream ballet as an art form and a revenue opportunity.