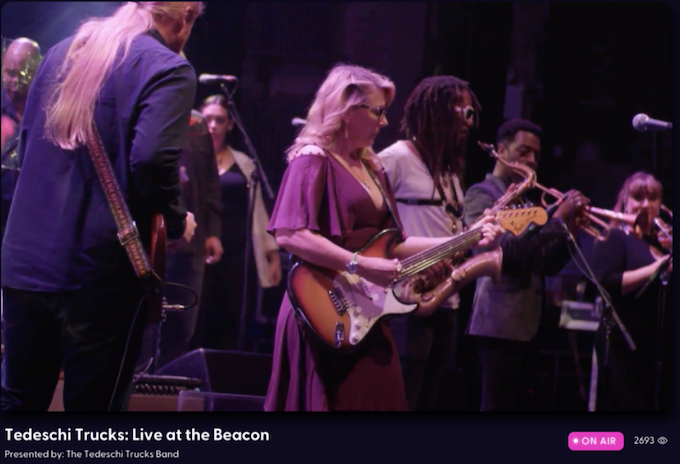 “Before Tedeschi Trucks Band worked with Stellar, the livestreams were either merely an afterthought or a side-note. Not anymore. The two shows we did with Stellar were truly handled as an ‘event’ of its own, from ticketing, to fan experience and interaction, to the actual streamed show; thousands of people bought tickets, purchased merchandise and donated to the band’s musician and crew support fund.”

Tedeschi Trucks Band is a Grammy-winning blues rock group founded by married couple Susan Tedeschi and Derek Trucks in 2010. The band has released six studio albums and three live albums, but is perhaps best known for their captivating live concerts.
‍
Among TTB’s repertoire, their annual fall residency at the Beacon Theatre in New York City stands supreme. Every October, thousands of fans pack the Beacon for sold-out show after sold-out show. 2020 looked to be no different … and then COVID-19 came into the music industry like a wrecking ball, obliterating virtually every live show in its path.
‍

Unable to tour, and with their band and crew out of work, Tedeschi Trucks Band and their agent, Wayne Forte, began brainstorming creative ways to keep fans engaged while raising money for their crew. Their decision: To ticket a livestreamed recording of two nights from their 2019 Beacon residency while appealing for donations and selling merchandise to benefit the band and crew.

As a well-oiled touring machine, Tedeschi Trucks Band knew how to promote their live shows. But marketing old shows felt like a completely different beast. Acting like the shows were new events was out of the question. TTB’s fans are diehards.

Instead, Forte decided to make the livestream events about getting everyone back together to reminisce and enjoy a past live show while offering those same diehard fans the chance to see a concert they may have missed, either in favor of another night at the Beacon or because they had been unable to attend at all.  And an extra wrinkle: The decision to produce this ticketed event series was made late in September, with the goal of streaming the shows in October to coincide with the band’s traditional Beacon residency timing. That left less than a month to promote the shows and sell tickets.

Forte and Tedeschi Trucks Band chose Stellar as their online event platform due to Stellar’s robust feature set and commitment to giving back to the music industry. Less than 24 hours after partnering with Stellar, the event listing Tedeschi Trucks Band - From the Beacon Theatre 2019 was live, selling tickets and merchandise while generating donations.

Stellar’s organizer support team collaborated with TTB to offer ticket buyers a variety of price points that included the livestream event, merchandise and a 72-hour video replay of the concert. With Stellar’s add-on donation feature, TTB was also able to appeal for donations after fans had selected a bundle, removing the initial barrier of entry.
Various donation tiers gave ticket buyers plenty of options to choose from, and Stellar’s real-time reporting allowed TTB’s merchandising team to instantly receive orders with the customer information needed for fulfillment.

With the ticketing infrastructure in place, Stellar’s marketing consultants worked with Forte to assist with his promotional strategy. TTB negotiated promotional relationships with past venues and marketing entities including Madison Square Garden to help spread the word of the event series. And with Stellar’s tracking links, Forte was able to keep tabs on the progress of each affiliate’s efforts.

Stellar’s live chat feature transformed the shows from simple recordings of concerts into truly interactive live events. Fans were able to communicate with each other, share memories of past shows, and plan to see in-person shows together in the future. Stellar’s live reaction emojis were also incorporated into the customer viewing experience, with emojis customized to match TTB’s brand. Tedeschi Trucks Band also utilized Stellar’s stream widget functionality, interactive buttons below the streaming video player that encouraged donations. Stellar’s organizer support team also handled the actual livestreaming of the shows and created the video replay listings.

The concert series generated tens of thousands of dollars for the band and crew while entertaining thousands of fans from around the world. Additionally, $26,656 was raised from add-on donations alone! The event series’ success is a testament first and foremost to Tedeschi Trucks Band’s incredible fan base. It’s also proof that online events can be powerful revenue and fundraising tools, especially when using a professional platform such as Stellar.